Review: "The Theory of Opposites" by Allison Winn Scotch 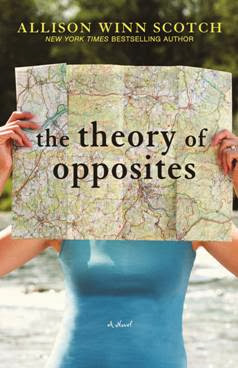 Willa Chandler-Golden's father has raised Willa and her siblings to believe that things in life are out of their control. His belief that everything that happens is inevitable is what he built his career on and it has become his religion in a way. Willa isn't sure if she buys into that whole theory but she can agree that fate has dealt her a great hand- she has a stable husband, good friends, a job that she enjoys. The only thing that fate has not yet handed her is a baby, but she's sure that one day she will become a mom.

Then comes the day when everything falls apart. Willa's husband Shawn suggests that they take a break from their marriage. Willa loses her job. Willa's siblings face their own challenges, involving her in the process. Willa feels like her neatly-ordered life has spiralled out of control so when her best friend Vanessa encourages her to take risks unlike any she's ever taken before, she accepts and she begins to learn that there is more to her than she ever believed.

I have to start by saying that I loved The Theory of Opposites. That should come as no surprise to anyone who has read my past reviews- I have, to date, thoroughly enjoyed every one of Allison Winn Scotch's books. What did surprise me, however, is discovering that this book was self-published by Allison. When I was originally offered a review copy of this book no mention was made by the publicist that Allison was branching out on her own. I read the book. I loved the book! Then the publication date arrived and the buzz began. Winn Scotch, an author who has been traditionally published four times to date, decided to self-publish. I suppose that this made me think about two things in particular. The first thing was that self-publishing is such a force now, and it is so fascinating to see that traditionally published authors are taking this route. I love that self-publishing makes books (especially eBooks) accessible and affordable for pretty much everyone. The second thing that I thought of was that I love that there is no longer the division between traditionally published and self-published books that there once was. The Theory of Opposites is one of Winn Scotch's best books to date and it was published without the help of a traditional publisher. Some of my favourite authors (Talli Roland, Michele Gorman, Heather Wardell) are self-published or have been in the past and I love that there are so many avenues for authors these days. It's nice that the readers can determine what kind of books that they want to read by purchasing those that appeal to them most instead of waiting for the publishers to determine what kinds of books will sell.

Now, of course, my thoughts on the book. The Theory of Opposites is about taking risks and living life to the fullest. I loved Willa and I loved joining her on her journey of self-discovery. At the beginning of the book Willa is so passive and she is just letting things come to her instead of going out there and getting them but by the end she is well on her way to determining her own future. Willa's family is such an essential part of the story and I appreciated them for bringing their own brand of crazy to the story! It was such an enjoyable and well-written book and I can't recommend it enough to those who are currently fans of Winn Scotch or to those who have yet to pick up one of her books. My thanks to the publicist for providing me with a copy of this book!
Posted by The Book Chick at 7:16 AM