Review: "The Comfort of Lies" by Randy Susan Meyers 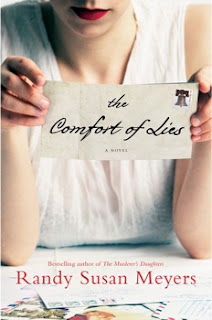 Five years ago Tia found herself pregnant by the man that she would never be able to have. Nathan is married and has two children and no intention of leaving his wife, despite the fact that Tia drives him wild. When she confesses her pregnancy to him he insists that she get rid of it and promptly severs all ties with her.

Five years ago Juliette thought that she had the perfect life- a steady marriage, two beautiful children, and a business to call her own. One day her husband Nathan came home and announced that he had had an affair, and that it was over. Juliette's world crashed down around her on that day and they have been steadily rebuilding their foundations ever since.

Five years ago Caroline adopted a child with her husband even though she had little interest in doing so. A pathologist who loves her job, Caroline hoped that when the baby arrived she would feel something maternal towards it. Years later she has discovered that while she loves her daughter with all of her heart she loves her job as well and she is torn between the two.

When Juliette opens a letter addressed to Nathan and sees pictures of a child that Tia is claiming is his, the world of the three women connected to that child begin intersecting in ways that they had never imagined that they would.

The Comfort of Lies is a compelling look at infidelity and how it affects those who cheat as well as those who are cheated on, as well as the muddied waters of adoption and how that affects all those involved as well. I have some limited experiences with adoption and how it can affect birth as well as adoptive parents and I found that part of the storyline particularly interesting. I'm sure that all those involved in an adoption must feel some sort of personal claim to the child and I thought it insightful that Meyers chose to explore this aspect of it.

I did wish that I would have felt more connected to one of the characters. They were all interesting in their own ways, and I was particularly fascinated by the character of Caroline who struggles with wanting to be a good parent but knowing that she has only succeeded in being distant, but I did not feel a particular connection with any of them. I felt like I was watching them from a distance and I didn't quite know who to feel most strongly for.

Overall The Comfort of Lies is a well-written and interesting look at infidelity, adoption, and parenthood that I can strongly recommend. It was evident to me that a lot of careful thought had gone into presenting all sides of this complicated story and as a reader I appreciated that and it made me want to read on. My thanks to the publisher for providing me with a review copy of this novel.
Posted by The Book Chick at 10:45 AM