Review: "To Have Not" by Frances Lefkowitz 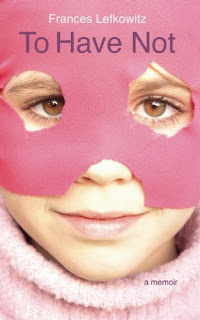 Frances Lefkowitz grew up as one of the "have nots" meaning that she grew up not having enough: living space, food, even affection. Born to parents who were truly too young emotionally to have children, they are still trying to figure out their place in the world when they suddenly, almost inexplicably, become parents to three small children. In To Have Not, Frances tries to make sense of her childhood, the frequent moves, the grimy, too-small apartments, and the lack of childhood comforts, so that she can bring awareness to the issue, but mainly so that she can gain insight into her own life.

I enjoyed this memoir, this remembrance of growing up without so many of the things that we all can take for granted. At some times I could relate to her; although my family is not one of the "have nots" we were certainly not one of the "haves" either. I grew up somewhere in the middle, with parents who both worked and who cared about our whereabouts, but where sometimes there was just not enough money to go around. At other times I could not relate to the story personally, but rather read with a sense of awe, awe that Frances had survived so much hardship in her young years, to go on to become successful, with health insurance and goals in life.

At times towards the end I grew annoyed with the tone, the "woe is me" tone. I can certainly agree with the fact that she often had to go without, especially as a child, but in her adult years she seems to be doing well on the outside and I was hoping that what was going on in the inside would follow suit. As an adult she has managed to do things that I have not yet been able to do, she's travelled, seen some of the world, attended an Ivy League school, so at that point I felt that she should have been able to move on from her childhood in some ways. However, I can also understand that emotional scars run deep, and that who we are as children can certainly affect who we are as adults.

What I took from the book, beyond the fact that this is Frances' personal story, is that we as people, regardless of our personal circumstances, should learn to treat those around us the same as everyone else, regardless of income or upbringing. I appreciated that underlying message and will certainly try to take that wisdom with me as I travel this path called life.

Well-written and interesting, with a subtle message that we should all take to heart, To Have Not is an interesting read for memoir fans.