"My Father's Wives" by Mike Greenberg 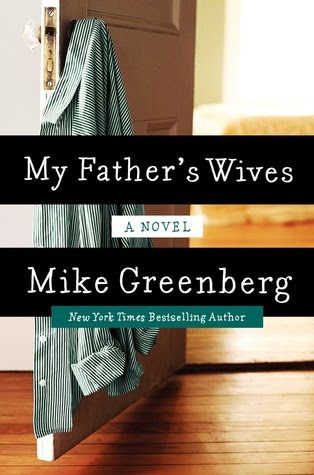 Jonathan Sweetwater has it all- a fulfilling, high-profile career, a devoted wife, and two beautiful children whom he adores. Coming home early from the office one day, a rarity in Jonathan's world, he happens upon a man and a woman, in his guest bedroom, naked. Only seeing them from behind, he observes that the woman looks much like his wife Claire. But could it be? Could his wife be cheating on him? Hiring a private investigator to find out what he scarcely wants to know himself, Jonathan decides to pursue more information about his father, whom he has not seen since he was 9 years old, and who is now dead, by meeting and speaking with his father's six wives, some of whom he has never met before. In his pursuit of these women and of the answers that they might hold to his own past, will Jonathan find what he seeks? Will he find out the answers about his father and about his own marriage that he is so desperately looking for?

I absolutely love Mike Greenberg's writing style. He writes with charisma and I found myself thinking about My Father's Wives even when I wasn't reading it. I was invested in the story and the characters from the beginning. Jonathan Sweetwater, despite his rocky relationship with his father, seems pulled-together and admirable. He has a solid relationship with his mother, his wife, and his children, and a job that most would find more than respectable. He doesn't gamble or drink excessively or cheat. His carefully ordered world falls apart around him when he believes that he catches his wife cheating on him, and suddenly he finds that not only does he have questions about his wife's fidelity, but he has questions about why his late father left him at such a young age and didn't ever want to have contact with him again.

This is where the story lost me a little, as far as plot goes. I could understand why Jonathan wanted to reach out to his father's ex-wives, to meet them and to learn more about his absent father. He seemed to be searching for the answer to a specific question, though, which he often expressed to the ex-wives. The problem is that he didn't know what question he was looking for the answer to. He told one of the ex-wives that he was searching for something, but that he didn't know what. We never do find out what question about his father Jonathan holds in his heart. I also found that the book shifted from being about Jonathan and his marriage, to Jonathan and his father. Both were valid parts of the plot, but I failed to see how they connected. He seems aimless in his quest, and this leaves the story feeling rather aimless as well.

Despite the rather unsatisfying conclusion (we never really find out the answers to the questions that we, as readers, have) I truly enjoyed My Father's Wives. The plot, while directionless at times, was interesting, the characters fleshed-out and fascinating. I couldn't put the book down and found the writing compelling. This raises an interesting point for me as a reader and blogger- despite the fact that the plot often wandered and that the conclusion was not what I was looking for (two things that are often crucial to my enjoyment of a book), I still really enjoyed the book. Perhaps that is a testament to Mike Greenberg's talent as an author, and I, for one, can't wait to read what he comes out with next. My thanks to the publisher for providing me with a review copy of this book.
Posted by The Book Chick at 5:00 AM