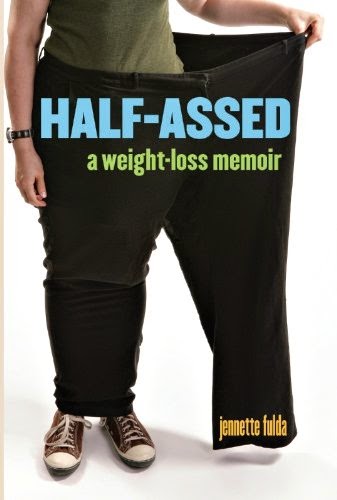 I saw this one advertised in the back of a different book that I read ,and it instantly appealed to me. So many people suffer from obesity! It has become an epidemic among North Americans. I can't remember a time in my past when I haven't considered myself to be overweight. My husband insists that I'm not fat (thanks husband! I love you!) but the truth is that I've always carried extra weight and I've been struggling to lose it for as long as I remember. Jennette Fulda's memoir appealed to me because she went about losing weight the healthy way, not the easy way, and I was interested in the details of her journey.

While she wasn't born fat,one day Jennette Fulda realized that she was obese. She weighed 372 pounds. Those 372 pounds had crept up on her, so slowly that she almost didn't realize that they were there. However when she went in for gall bladder surgery at the age of 23, the truth smacked her in the face. She needed to lose weight or she would suffer even more extreme health-related consequences. Despite her new- found knowledge it still took Jennette more than a year to even begin her journey. She started off slowly but over the next year she successfully loses more than half of her body weight and she does it the old-fashioned way, by eating healthy and exercising.

Half-Assed is nothing short of inspiring. Jennette's journey started off with her taking a single step in the right direction and the result of that was that she lost an awe-inspiring amount of weight. My favourite part is that she did it the hard way. She didn't take the easy way out, she didn't seek out the quick fix or embark on a fad diet. She didn't even opt for weight-loss surgery, which was a viable option for her. She simply took one step in the right direction, and then she followed it up with another. She learned to eat better, she exercised, she sought out helpful information and as she did these things, she shrank.

Sure, at times the story feels repetitive, but that is to be expected. After all, long-lasting weight loss comes from being consistent and from doing the same thing over and over. That's how the weight comes off and stays off. Throughout it all Jennette remains realistic. She knows that, already having been obese, the fat that she has lost is waiting around every corner. Every pound that she lost has the potential to be regained and she knows that and remains vigilant. Throughout her journey she even realizes things about herself and about her need to accept herself before others can accept her for who she is. I especially love that at the end she emphasizes that losing a large amount of weight is not a magic cure to fixing your life. She shares with her readers that her life did not drastically improve in every way as she lost the pounds. Mr.Right did not materialize out of thin air, nor did the perfect job and apartment just appear. However she gained some things that were far more important- self-realization and control of her life.

I'm glad that I read Half-Assed. I read it purely for me, simply because I was interested in the journey that this brave and determined woman took. In the day and age of fast fixes and easy answers Jennette is determined to do things the right way, no matter how painful that may be, and that was both inspiring and refreshing.
Posted by The Book Chick at 5:00 AM