Review: "The Fault In Our Stars" by John Green 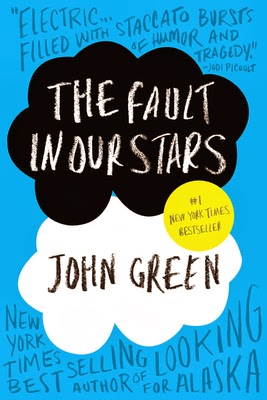 Unless you've been living under a rock for the past year, I'm sure you've heard of John Green's The Fault in Our Stars. It has been on my wish list for a while but I decided to bump it up in the queue when it appeared on list after list of the best books of 2013.

If you don't know the general plot The Fault in Our Stars tells the story of 17-year-old Hazel. Although a new medication has shrunk her tumour and bought her a few more years, her cancer is terminal and she and her parents are dealing with it as best as they can. While attending a Cancer Kid Support Group Hazel meets Augustus, a cancer survivor, and Hazel finally discovers what it feels like to fall in love. The Fault In Our Stars deals with love, life and death in a sensitive and heartbreaking way.

Despite the obviously sad parts of the story, The Fault in Our Stars is a beautiful story of love and hope. The subjects of cancer and death are dealt with head-on with honesty but they are always addressed in a respectful way. I found that these pages contained insight into the lives of those dealing with cancer that I didn't previously have, nor had I really thought about in any kind of depth. While all of the characters were amazing in their own way, I really loved Hazel's parents. Perhaps as a parent myself I found myself relating to them the most. They were often found in the background of the story but their role was one of importance. As Hazel dealt with her cancer her parents dealt with the fact that they would lose their daughter far before they were ready to and that life would have to continue for them after that point as well.

Thought-provoking, triumphant, and moving, I will admit to shedding tears during one particularly moving passage, and I'm certain that I'm not the only one who did so. This one wasn't a review copy for me, but simply a book that I wanted to read, and I'm glad that I took the time to do so. Although classed as a YA novel its scope goes far beyond that and I'm sure that many adults will enjoy it as well.
Posted by The Book Chick at 5:00 AM