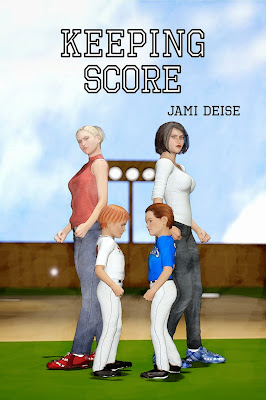 KEEPING SCORE is on sale this week for 99 cents!

When her son wanted to play travel baseball, Shannon Stevens had no idea the worst competition was off the field…
When her son Sam asks to try out for a travel baseball team, divorced mom Shannon Stevens thinks it’ll be a fun and active way to spend the summer. Boy, is she wrong! From the very first practice, Shannon and Sam get sucked into a mad world of rigged try-outs, professional coaches, and personal hitting instructors. But it’s the crazy, competitive parents who really make Shannon’s life miserable. Their sons are all the second coming of Babe Ruth, and Sam isn’t fit to fetch their foul balls. Even worse, Shannon’s best friend Jennifer catches the baseball fever. She schemes behind the scenes to get her son Matthew on the town’s best baseball team, the Saints. As for Sam? Sorry, there’s no room for him! Sam winds up on the worst team in town, and every week they find new and humiliating ways to lose to the Saints.
And the action off the field is just as hot. Shannon finds herself falling for the Saints’ coach, Kevin. But how can she date a man who didn’t think her son was good enough for his team … especially when the whole baseball world is gossiping about them? Even Shannon’s ex-husband David gets pulled into the mess when a randy baseball mom goes after him. As Sam works to make friends, win games and become a better baseball player, Shannon struggles not to become one of those crazy baseball parents herself.  In this world, it’s not about whether you win, lose, or how you play the game… it’s all about KEEPING SCORE.

Excerpt from KEEPING SCORE
"You're going to need to get yourself a mitt if you want to throw with this young man," a voice said behind me.
I turned around. I couldn't believe it -- it was Kevin, the other coach from yesterday's try-out. He was carrying two buckets of balls, filled to the rim. I'm sure they were incredibly heavy, but he made it look effortless.
"You had a nice try out yesterday," he told Sam.
Sam wasn't having any of it. "Then why didn't I make the team?"
Kevin looked apologetic. "I'm sorry, son. I'm not the one making those decisions."
Scott saw us talking, dropped his mitt, and ran to join us. For the first time, I noticed he wobbled from side to side when he moved. My disgust for him grew.
"Thanks for bringing these by, Coach," Scott said. "We go through a lot of balls at practice."
"Most of them get lost in the woods," Sam said, and Kevin laughed. Matthew trotted over to Sam, and they started to throw to each other. I headed to the bleachers.
Kevin followed me. "I really am sorry about your son. Did he take it hard?"
"Only if you consider crying hysterically for a half hour to be taking it hard."
Kevin cringed.
"I know. It's all decided before the try-out even happens. I just wish someone had told me that ahead of time." I gestured to Scott, going through the bucket of balls and sorting out the clean ones. "Or maybe I should have volunteered to coach."
Kevin didn't seem to find that funny.
"So the other boys who made the team. Are they as bad as Matthew?"
"Everyone on our team is very good. And Matthew has promise."
"Promise? Of what? Striking out every time?"
"Look, I know you're feeling defensive, and I don't want to make you even madder, but Patrick thinks speed is the most important factor for a baseball player. Everything else can be taught. But if you're slow, you're slow. And your son is…"
"That's wonderful. You want the kids to move really fast back to the dug out after they strike out, is that it?"
"Speed is the foundation of baseball," Kevin repeated, the way a religious zealot repeats that the world is coming to an end. Of course, didn't the fanatics call baseball a religion? "If your son was fast, I could have made a spot for him on the team."
Kevin put a hand on my arm, but I shrugged it off.
"Look, it's summer, he'll be outside a lot. Maybe he'll speed up if he loses a few pounds, and --"
"Are you saying my son is too fat to play for your team?"
Kevin was beet red. By now, Mary Beth and some of the other moms had arrived, and they were staring at me like I'd gone stark raving mad. Maybe I had.
Kevin looked at them and lowered his voice. "Do you want to run to Starbucks and talk about what your son can --"
"Sam. My son's name is Sam. And I can't believe you're asking me out!"
"I just don't want the boy to give up on baseball because of this."
I gestured to the field, where Sam was throwing with Josh. "Does he look like he's giving up? And don't worry, coach. I actually found Sam a summer team. With a coach who was more impressed by his bat than his waistline. So I guess we'll see you around this summer." With that, I marched off.
Kevin looked embarrassed. He hurried off the field, got into a dusty pick-up truck filled with baseball equipment, and drove away.
About Jami Deise…
A lifelong resident of Maryland, Jami Deise recently moved to St. Petersburg, Florida, along with her 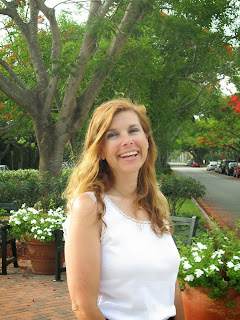 husband Tom, son Alex, and dog Lady. A baseball mom for over 10 years, “Keeping Score” is her first novel. Jami is an associate reviewer at www.chicklitcentral.com and a generalist reader for an NYC-based literary agency. Along with women’s fiction, she loves all things horror and watches too much TV.