Review: "All You Could Ask For" by Mike Greenberg 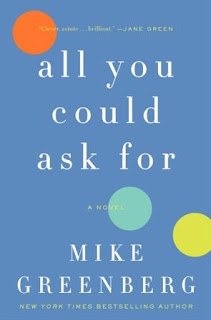 Samantha is a brand new bride who realizes on her honeymoon that she has made a huge mistake in marrying her husband. While in Hawaii with him she discovers naked pictures of another woman on his computer with a note telling him to have fun with his daughter while he's on vacation.

Katherine is at the top of her game, career- wise. She has everything that a woman could ever ask for including a closet filled with designer clothing and a personal driver. Despite her success Katherine does not have a man in her life and she's lonely, even if she will not admit it. She remains hung up on the one man who broke her heart more than 20 years ago and she is having a hard time letting go.

These three women have no idea that despite their very different ages and backgrounds their lives are about to intersect in one of the most personal ways possible, and that they will find themselves turning to one another when things matter the most.

If I could choose only one adjective to describe All You Could Ask For I would likely choose "surprising". I was surprised by how much I felt connected to the lives of the characters from the very beginning. I was surprised by the one thing that brought these three woman together midway through the book. I was especially surprised by how well author Mike Greenberg got into the heads of these three very different women. I knew that the book was written by a man but he obviously "gets" women because his portrayal of them was spot- on. Not once did I find myself rolling my eyes at the antics of one of the characters or feeling that they were behaving inappropriately. Greenberg really seemed to get these women and what they were about.

I found myself drawn into this book from the very first pages. The chapters were short and alternated between each of the stories of each woman. Since I deliberately did not want to know what the connection would be between these three women I chose not to find out ahead of time, and just when I began to wonder what could possibly tie people so different together in a way that would make sense he revealed that information and I have to admit that I was surprised. The twist was delivered skillfully and the whole tone of the book changed in an intriguing way.

All You Could Ask For is definitely one of those stories that will keep you thinking long after you've read the last page. The book was well-written, the plot was engaging and relevant and I truly hope that this will not be Greenberg's last foray into writing fiction directed at women because I can't wait to read what he comes out with next. My thanks to TLC Book Tours for inviting me to participate in this tour!

Important Note: In conjunction with the release of this book, Mike and Stacy have created a foundation called Heidi's Angels, through which all of the author's profits from the sale of this book will be donated to The V Foundation for Cancer Research to combat breast cancer.