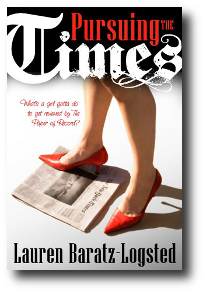 Mercury Lauren (not to be confused as a relation to Ralph Lauren, although she's tried) is a commercially successful author. So what if her publishing house is represented by a pink eraser? She's a good writer and she's making a good living at it. There is one thing that would make her happier, though, and it's not a bigger paycheque. Mercury would do just about anything to be reviewed in The New York Times Book Review but she has a better chance of being struck by lightning than ending up in those hallowed pages.

Mercury manages to convince her agent Angel to introduce her to the editor of the NYTBR, Frank D'Archangelo. Mercury figures that if she can get just one of her books into Frank's hands she will change his mind about chick lit and hopefully she will get reviewed. Unfortunately Mercury manages to make an enemy of Frank from the very beginning and the two don't exactly hit it off.

What follows is a thoroughly entertaining and often hilarious story about Mercury's attempts to get back on the good side of Frank D'Archangelo while continuously screwing it up. Given the fact that Mercury is completely self-absorbed at times and utterly delusional at others and  we are in for one heck of a ride.

I loved Pursuing the Times! I am a long-time fan of Lauren Baratz-Logsted. Her books are witty and entertaining, and the best part of Pursuing the Times was that not only were we given a fun story with lots of funny scenes but Baratz-Logsted made a statement about how fiction written by women for women is regarded by the general population. I'm not a fan of vampire fiction or sci-fi or *shudders* Fifty Shades of Grey. However just because I'm personally not a fan I'm not going to declare that those kinds of books aren't really books. I'm not going to dismiss them as beneath me. I'm just going to be glad that they entertain people, and that people are reading. I still fail to understand why chick lit has such a bad reputation. I enjoy it because the stories are entertaining. I especially love books where I connect with the characters or the themes in some way. Books about marriage and parenting especially appeal to me. If these books make me happy, and if these books make me think, who is someone to say that these books are not worthy because they don't fit into a certain genre, or because there is pink on the front cover?

Main character Mercury Lauren certainly made this book entertaining. She was a lot of fun because she was so bizarre. She was a neurotic writer and completely self-absorbed. At the beginning of the book her only friend is her agent Angel but, funnily enough, she had never been inside of Angels' home! The things that made sense in Mercury's head ("Hey! I'm going to learn to golf by reading a tiny handbook about it and then I'm going to follow this guy across the country on a golf retreat so that he notices me!") made no sense to anyone but her but they certainly resulted in hilarity ensuing. Baratz-Logsted throws in a little romance for good measure, and I, for one, did not complain about that addition at all.

Witty, thought-provoking, and hilarious are all words that I would use to describe Pursuing the Times. I loved how the author managed to bring new life to an age- old debate about what counts as "literature" and what does not while keeping it light and fresh. My thanks to the author for providing me with a review copy.
Posted by The Book Chick at 4:21 AM