Review: "All At Sea" by Heather Wardell 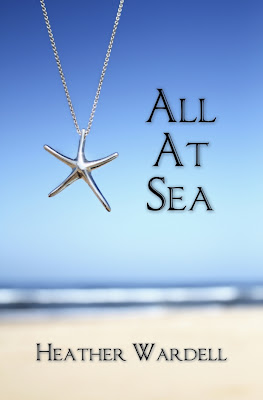 Melissa and Owen met on New Year's Eve and by Valentine's Day he had proposed. Now it's March and Melissa and Owen have embarked on a two-week Caribbean cruise with a few of their friends and family to officially tie the knot. It's a whirlwind romance with a happy ending for Melissa, who has wanted to be married for years now and finally has her chance to become a Mrs.

Melissa is prepared for the wedding but she is not prepared for the fact that she has dated not one but both of Owen's brothers. Her relationship with Austin was no more than a steamy fling but she broke Nicholas' heart and she is about to marry his brother in less than two weeks time. Complicating things further is the fact that Owen has been spending all of his time in the cruise ship's casino instead of with her. Since Melissa wasn't aware of his gambling tendencies before they boarded the ship she begins to realize that perhaps she doesn't know all that she needs to know about her soon-to-be husband. Perhaps theirs is not a match made in heaven after all.

All At Sea is Heather Wardell's tenth novel and to date I have read them all! In All At Sea Wardell continues to entertain with her trademark writing style and creative plots. This plot is unique and fresh and she certainly kept me guessing as to what would happen right up until the end. I enjoyed getting to know Melissa and I felt like I was really able to get into her head. She is, to put it bluntly, a doormat and since I tend to have doormat tendencies myself I could relate to her as a person. I could relate to her ability to blank out the stuff about husband-to-be Owen that was making her uneasy. I could even relate to her indecision regarding whether or not she should marry him. I enjoyed watching her come into her own.

That being said, All At Sea is not my favourite novel of Wardell's to date. It felt rushed to me. There were parts of the plot that I felt could benefit from a bit of marinating time, and sometimes the characters felt too cliched for me. Although the book is edited meticulously, which I appreciate very much, the word "cuddled" was overused in my opinion, and that started to grate on me after a while.

Despite the things that I had issue with I can still recommend All At Sea without hesitation. It's an enjoyable light read and a great compliment to Wardell's "Toronto" series. My thanks to the author for providing me with a review copy.
Posted by The Book Chick at 5:09 PM