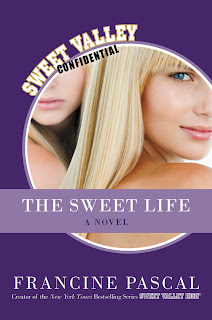 I grew up right alongside Jessica and Elizabeth Wakefield. They were a little older than me, and far more glamorous, but I anxiously awaited each of their adventures and I spent more of my baby-sitting money than I care to admit to purchasing the latest Sweet valley releases.

I'm all grown up now, but so are Jessica and Elizabeth and their Sweet Valley friends. Jessica is a mother and is successful in the PR field, but is her marriage to Todd beyond saving? Elizabeth is a rising star in the journalism field and is happily living with Bruce Patman, a changed man. When a scandal arises and rocks both Elizabeth and Bruce's world will their relationship survive? Lila Fowler is married to a man that adores her but will her desire to become a True Housewife of Sweet Valley jeopardize her home life? Steven Wakefield is now a proud parent but will one moment of inattention change his life forever?

The Sweet Life consists of six serials (initially published as a collection of individually released e-stories, now available in one volume) chronicling the life and times of many of the original characters from the Sweet Valley series. I began reading the first serial with the intention of reading it and then moving on to something else but I was hooked from the beginning! Once I was finished the first one I devoured the second one and so on, all the way to the stunning conclusion. This series is like chocolate; it's impossible to put down!

The Sweet Life is the literary equivalent of a television drama series or soap opera- there are several plot lines being followed and there is tons of drama! Reading it was almost a guilty pleasure; it was like candy for the brain! I thoroughly enjoyed it and the twists and turns definitely kept me on my feet.

There were a few plot lines that I felt could have been done better, particularly the one involving Steven Wakefield. Just as I was getting invested in his story it was concluded abruptly and I would have liked it to span several more of the stories rather than just ending suddenly.

The ending left my mouth hanging open- quite literally! It shocked me and it absolutely left me wanting more. In fact while many of the plot lines are concluded to a degree there is definitely room for a sequel to The Sweet Life. There is so much more that I want to know!

Fast-paced and fantastically fun, The Sweet Life will appeal to fans of the original Sweet Valley Series as well as new fans who enjoy their chick lit with a heaping side of drama! My thanks to the publicist for providing me with this review copy.
Posted by The Book Chick at 5:00 AM