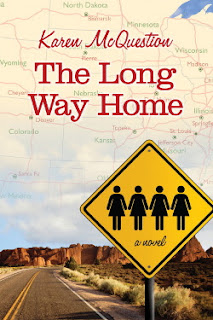 Four women from very different places in their lives come together for the trip of a lifetime in Karen McQuestion's latest novel, The Long Way Home. Jazzy is a young psychic whose intuition leads her to a grief group at the local community centre. There she meets Rita, a woman who continues to mourn the murder of her daughter ten years prior and Marnie, who is mourning not only the sudden loss of her boyfriend but also the fact that she can no longer see her beloved stepson, Troy. When Marnie discovers that Troy has been signed up for a six-week summer camp against his wishes so that his mother can travel Europe, she is determined to drive down to Las Vegas where he currently lives and to bring him home- even if it's only for the six weeks that his mom will be gone. Jazzy and Rita agree to go with her, each for their own reasons, and at the last moment Laverne, Marnie's reclusive downstairs neighbor, decides to come along as well.

These four women, strangers at the beginning of the trip, become friends as the miles pass beneath them. Despite their very marked differences from one another, each will learn something about themselves and about their new friends along the way.

I often find myself unable to suspend my belief when something supernatural or really spiritual happens to a character in a novel. It's not that I'm a skeptic, entirely, just that sometimes these unique experiences and characters are written in such a cheesy way that I find that portion of the book hard to believe. I found myself drawn to the character of Jazzy in this book. She is a young psychic who is not boastful of her abilities, but whom radiates positivity with every fibre of her being. Her character, and her belief that this whole trip is "meant to be", is what brings the four strangers together for the trip of a lifetime. I found her character, while in possession of unique abilities, both likable and easy to relate to, and for that reason I was able to find the fact that she was in possession of psychic abilities believable. I was able to just sit back and enjoy the ride.

The other characters that we meet during The Long Way Home were thoroughly enjoyable as well, as was the plot. In addition to Jazzy, I found myself drawn to Marnie, perhaps because she was closest to me in age. I enjoyed the plot, found it to be fast-paced and exciting (I read this book much quicker than I thought that I would because I just couldn't stop turning the pages!) and the conclusion was satisfying for me. Karen McQuestion has written a captivating novel that I can recommend to anyone looking for a book about diverse friendships and female relationships.