Review: "Between You And Me" by Emma McLaughlin and Nicola Kraus 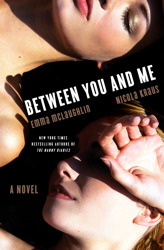 Twenty-seven year old Logan Wade is trying to build a life for herself far away from her unhappy childhood with her even more unhappy parents. She is trying to settle into her life in New York but her apartment is tiny, her job sucks, and the guy that she's thisclose to getting a commitment out of suddenly gets cold feet, managing to ruin her birthday at the same time. When she gets a call from her famous cousin's personal assistant requesting her presence in Los Angeles, Logan jumps at the chance of a reunion, even though they haven't seen each other in years. Logan's cousin Kelsey is now a singing sensation who is performing a sold-out tour, and when Kelsey asks Logan to become her new personal assistant, Logan impulsively agrees despite what has happened in the past.

As Logan gets used to her new lifestyle she sees that not all is as it appears on the surface. She witnesses firsthand the bizarre dynamic between Kelsey and her damaged parents and she sees how things that happened in their shared childhood continue to affect the family today. When Kelsey makes as attempt to live a "real" life and it all goes horribly wrong, Logan is left holding the pieces and wondering if they can even be put back together again.

Wow. Between You and Me was addictive from the start. I picked it up and I found myself unable to put it down. I've always enjoyed following breaking celebrity news stories and although I am far from obsessive I do pick up People magazine from time to time to see what's happening in the world of glitz and glamour. Between You and Me tells the story of a fictional superstar who could easily be any one of the stars with huge fan bases today. I really felt like McLaughlin and Kraus understood the true world of celebrity and just how exhausting and fake and lonely it is. They portrayed the life of Kelsey so clearly and with such conviction that I was completely sucked in to the story.

I especially enjoyed the fact that this is no fairy tale. Kelsey's life seems, to be quite honest, awful and one that I would not readily sign myself up for. The constant paparazzi presence along with the travelling and performing schedule hardly seemed to make the large sums of money that she was being paid worth it.

The ending of this book was not at all what I was expecting, and I loved that. To be quite honest, it floored me. I'm surprised yet pleased that this is how McLaughlin and Kraus chose to end Kelsey's story and I personally feel that it reflects how far they have come as authors. I thoroughly enjoyed The Nanny Diaries and all of the authors' subsequent books, but Between You and Me is one of their best yet.

Compelling and often shocking, Between You and Me gives readers a glimpse into the not-always-glamorous world of fame. Although our narrator isn't the most interesting person in the story and at times the book does read like an account of the life of pop star Britney Spears, I found this book to be interesting and thought-provoking and I would recommend it to anyone who has ever wondered what goes on behind the closed doors of a celebrity. My thanks to the publisher for providing me with this review copy.
Posted by The Book Chick at 5:00 AM