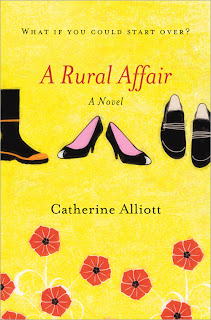 Poppy Shilling isn’t quite as upset as one would think when her boring, cycling-obsessed husband dies suddenly after being struck by a free-falling chunk of ice from the sky. You see Poppy had married Phil mostly because all of her friends were being married off, one by one, and he was what was left in the dating pool. There had been no dramatic falling out of love over time, they quite simply hadn’t fit right from the beginning and although she’s sad for the sake of her children, she’s ready to move on. However this chapter won’t be closed quite so neatly. Shortly after her husband’s death Poppy finds herself receiving a visit from a beautiful young woman claiming to have been her husband’s lover for the past four years. Shocked and very angry, Poppy finds herself forced to come to terms with the affair, but matters become worse when the home-wrecker tries staking a claim on her late husband’s insurance policy and assets.

With the help of a few close friends, as well as her eccentric father, Poppy manages to work through the varying stages of grief, anger, and disbelief that follow the sudden revelation of an affair. In the end, Poppy may even find love again.

I’ve been a fan of Catherine Alliot’s for only a little while now. Amazingly, given my love for all things chick lit and British, she was only introduced to me recently. I read A Crowded Marriage and was instantly hooked, and she’s quickly become a favourite of mine. I enjoyed A Rural Affair, but it wasn’t the best of hers that I’ve read. To be honest I found that the middle sagged quite a bit and I felt that it could have been about 100 pages shorter without losing any of the plot. I found myself checking page numbers when I was about half way through and wondering when things were going to pick up a little.

That being said, there were certainly a lot of things to love about A Rural Affair. The beginning was interesting- we get to know Poppy and her children and we find out more background information about Poppy’s marriage and why it wasn’t a match made in heaven. I liked Poppy as a character as well. She was quite matter-of-fact about her marriage and why it hadn’t been working for quite some time, and she seemed able to carry on on her own. I also enjoyed the last several chapters. Everyone seems to get their happy endings, and in some cases people get what is coming to them (I love the odd bit of mild revenge in a plot, don’t you?).

I would certainly recommend A Rural Affair to fans of Jill Mansell or Marian Keyes. It’s a great story with lively characters, just be prepared to skim through the middle a bit. My thanks to Sourcebooks and Netgalley for this review copy.