Review: "The Queen of New Beginnings" by Erica James 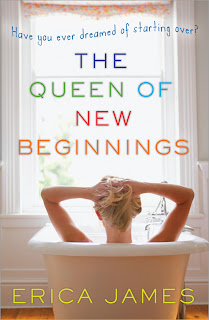 I have quickly become a new fan of Erica James! Her chick lit is fun, funny, fast-paced and interesting. I found her book to be an easy read (but not unintelligent or dumbed down) and I can highly recommend her books if you're looking for something light to read over the holidays. I gravitate towards lighter reads over the holiday season because I find them easy to follow despite the fact that I seem to be doing a million other things at the same time.

What do you get when you combine a man who has been through heartbreak and is desperate to escape it all and you combine that with a woman who enjoys making herself into someone that she is not? You get The Queen of New Beginnings. After being publicly humiliated by his girlfriend and his former writing partner, Clayton Miller leaves London seeking anonymity in the country. He is in desperate need of a housekeeper to run the household and keep him out of the public eye so he quickly hires Alice, who is doing a favor for a friend by temporarily working as a housekeeper for her company. Alice, a voice over artist, enjoys creating persona's for herself as she takes on these cleaning jobs and introduces herself as Katya, a woman from Latvia.

Alice isn't the only one hiding things. It quickly becomes apparent that Clayton is hiding things about himself and his fame as well. Although the two get off to a rough start they quickly find themselves bonding in their odd situation, and Alice finds herself revealing things to Clayton about herself that she has previously kept private. The two form an unlikely friendship and their story comes to a surprising conclusion.

The Queen of New Beginnings is a fun, light, and satisfying read. I genuinely cared about each of the characters and the cast of supporting characters were interesting and lively as well. The plot was familiar in the sense that it followed a fairly typical pattern, but that made reading it all the more comforting for me. This was an enjoyable read and Erica James has an extensive back list that I will certainly be tracking down in the future.

My thanks to Sourcebooks for providing me with this review copy.
Posted by The Book Chick at 5:00 AM