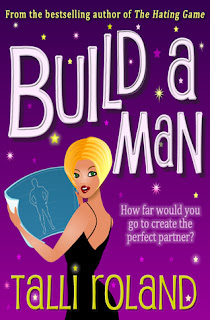 American citizen Serenity Holland moved to London with her best friend in search of adventure and possibly a position writing for a tabloid magazine. Instead she finds herself working as a receptionist in a plastic surgery office, and she just happens to be dating (and living with) her boss.

Serenity finds herself longing for more, like a job that she doesn't hate or a boyfriend who will eat more than plain chicken breasts, when Jeremy Ritchie walks in the door of the surgery looking to change everything about his outward appearance in order to make himself more attractive to women. Serenity finds herself instantly inspired to write an article about Jeremy and the changes that he is about to undergo and no one is more surprised than she when her pitch to a major tabloid is accepted. The catch is that both Jeremy and her boyfriend boss can't know that she is writing about them, and Serenity finds herself going undercover.

When the unthinkable happens Serenity finds herself required to decide what is really important to her, and the conclusions that she comes to may surprise even herself.

I can easily say that Build a Man is my favourite Talli Roland novel to date. There's just something about Serenity that made me like her from the beginning, despite the fact that my life has little in common with hers. She's so sincere. She genuinely loves her friends, and she's trying to be an adult in her relationship. Her determination to achieve her goals is charming and the mistakes that she makes along the way just make her more lovable.

The real star of the show, though, is Jeremy. I think that most will agree that he is the perfect hero. Having been hurt in the past he is determined to make himself into a new man and he goes about his task with gusto, but in the midst of this he remains sincere and down- to- earth. He isn't perfect and that's what makes him so endearing. His sweetness is evident throughout the book and I was especially interested to find out how his story ends.

Build a Man is fast-paced, well-written chick lit that I can't recommend highly enough. Talli Roland has a sequel to this one coming out titled Construct a Couple and I've already added it to my wish list. My thanks to the author for sending me this review copy.
Posted by The Book Chick at 8:23 PM