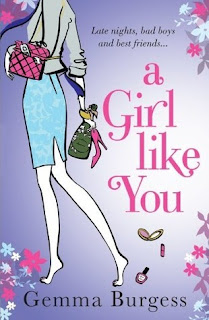 Abigail has been with her boyfriend since, well, forever, so when the two of them split up Abigail has absolutely no idea how to date. The prospect of dating excites her, as she hasn't had the opportunity to do it yet in her adult life, but the fear of doing or saying the wrong thing scares her. She enlists the aid of her roommate Robert, who seems to have a different date every night and appears to be quite successful at what he's doing, given the number of women who end up in their apartment the following morning. When Abigail opens herself up enough to become involved with a new man is she setting herself up for success or for disaster? Is her knight in shining armour out there somewhere?

I have to start by saying that I adore chick lit, but that I really adore British chick lit. There is just something about those cheeky Brits! Combine the fact that A Girl Like You is Brit chick lit with a purple cover to boot, and let's just say that I was sold before I even opened the book. Luckily the inside was even better than the outside. I loved that our main character, Abigail, was looking for love but wasn't looking to become a doormat. She definitely had her standards and settling certainly wasn't one of them. I get annoyed when the heroines in chick lit seem eager to change themselves in order to get or keep a man because in reality, we shouldn't have to compromise. We shouldn't settle until we find a man who loves us for who we are, warts and all. If you love a heroine who isn't afraid to say what she's thinking, you'll love Abigail.

The other thing that I loved about this book was the romantic tension between two of the characters. No, I'm not telling you who they are, and yes, you'll be able to figure it out for yourself when you read it. There were sweet moments, laugh- out- loud situations, and an ending that left me all warm and fuzzy (the best kind!). Plum, the best friend who is single and shamelessly looking for a man, was a fun addition to the plot with her larger-than-life personality.

A Girl Like You was the first book that I've read by Gemma Burgess, but it won't be my last. I'm excited to pick up a copy of her debut novel, The Dating Detox, because I enjoyed this one so much. My thanks to HarperCollins Avon for sending me a review copy of this book.