Review: "How To Be an American Housewife" by Margaret Dilloway 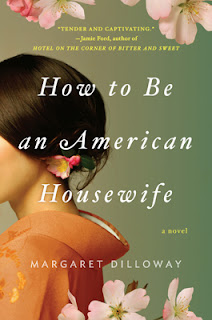 I was thrilled when I won a copy of this book. Not only had I heard fantastic things about this debut novel, but my library didn't have a copy. I started it with the expectation that it would be engrossing, and I wasn't disappointed.

Shoko married an American man during the war, out of necessity and because of her burning desire to escape the Japanese way of life. Try as she might, she never quite fits in in America. Her accent and her way of dress set her apart and the other women in the community essentially shun her. Shoko is growing old now, and her heart is starting to give away for some unknown reason. When she receives a letter informing her that her little sister has died of heart complications, Shoko knows that she needs to return to Japan and make amends with her brother over a long-ago feud, but is too weak to do so. Instead of going herself, Shoko begs her grown daughter Sue to go in her place.

Sue is a single, divorced mother, disillusioned with all that being an American housewife was supposed to be. Sue agrees to travel to Japan to meet her long-lost relatives and she uncovers family secrets that change the way that Sue views her mother.

I thoroughly enjoyed How To Be An American Housewife, which was told from the point of view of Shoko and of her daughter Sue. As a reader I couldn't help but feel compassion for Shoko, who had given up so much in order to try to have a better life, and who was never quite able to fit in in the way that she hoped. Shoko appears to be a simplistic person in the beginning, but as the story progresses her layers are uncovered, and we find that she is actually quite complex.

I especially appreciated the insight into Japanese culture, and the comparisons between Japanese and American culture. Each chapter begins with a fictional excerpt from the book 'How To Be An American Housewife', based on excerpts from an actual book that the author found in her Japanese mother's posession. Like another book that I recently read, 'Moonlight in Odessa', it struck me that our culture and the things that are so familiar to us, are so incredibly different from the cultures around the world. Japanese households pride themselves on simple beauty, and Japanese women ensure that they look their best before they leave the house, which is a far cry from the yoga pants and sweatshirts that we (including me!) often don before leaving for the outside world in the morning.

So much more than just a cultural comparison, How To Be An American Housewife is the story of mothers and daughters, forgiveness, and making amends with your past. A beautifully written and engaging book, I highly recommend this novel to anyone in search of a charming read.