Review: "The Debutante" by Kathleen Tessaro 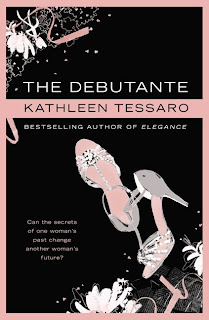 Cate is running from her painful New York past by working for her aunt in England when she's sent to value the contents of an estate of a former debutante. Irene Blythe has passed away and all of her worldly possessions are being auctioned off, but there's more to her estate, Endsleigh, than meets the eye. While valuing contents, Cate comes across an old, hidden shoebox. Inside is a tiny pair of torn dancer's shoes, a picture of a handsome soldier, a tiny bracelet from Tiffany's, a monogrammed case, and an old badge. Convinced that there's something special about the box and its contents, Cate hides it in her suitcase. When she returns to London she begins unravelling the mystery of the contents of the shoebox, believing that they belonged to Irene's sister, Baby, who mysteriously disappeared and was never found. As Cate digs deeper into the box, and into her own past, she discovers that perhaps there was more to the Blythe sisters than anyone suspected.

I've read a book by Kathleen Tessaro before (my review of The Flirt) and I enjoyed it. When I had the opportunity to review her latest I jumped at the chance. I have to be honest and say that there were parts of this book that disappointed me. My primary complaint with The Debutante is that our three main modern-day characters, Cate, Jack, and Rachel were woefully undeveloped. Each of the three had their own painful past and their own back stories, but for me it felt like they were presented as an afterthought. I failed to care about the characters or how their personal stories were resolved. There were a few "racy" scenes inserted randomly which didn't do anything for the plot, and failed to develop into anything later on.

That being said, what the book lacked in modern-day character development, it more than made up for in the historical sections. I devoured the story about Irene Blythe, the proper sister, and Baby Blythe, the wild, uninhabited sister. Their side of the story is told for the most part through letters from Baby to her sister or to her lover. When Cate returns to London and begins to investigate the contents of the box that she found, more pieces of the mystery of Baby's disappearance are revealed, making it that much more interesting. And the conclusion to the story of the Blythe sisters? Shocking! I had to read it twice to make sure that I read it correctly. Making the whole thing even more interesting is the "Author's Note" at the end of the book, where Kathleen Tessaro explains her inspiration for the story. It was interesting to see where she got her ideas and how she put them all together.

If you can overlook the fact that the modern-day characters aren't that interesting, The Debutante is an enjoyable read which tells a story of  romance, history, and mystery. It's worth picking up for the story of the Blythe sisters alone. Click here to browse inside The Debutante.

Thank-you to HarperCollins Canada for sending this review copy in exchange for my honest opinion of the book.
Posted by The Book Chick at 5:49 AM