Review: "The Truth About Delilah Blue" by Tish Cohen 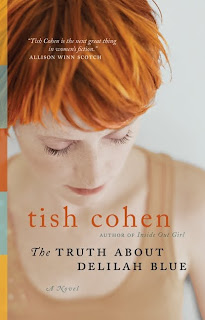 Delilah Blue was only 8 when she moved with her father from Toronto to Los Angeles. Told by her father that Delilah's mother no longer wanted the responsibility of raising a child, Delilah is a little lost now that she's 20 and entering into adulthood. She's desperate to become an artist, to prove to her mother that she's worthy of being loved. Her father refuses to pay for art school, so she's posing as a nude model for art classes, absorbing the lesson and making a few dollars at the same time. To make matters more complicated, her father seems to be exhibiting signs of early-onset Alzheimer's.

Little does Delilah know that amidst all of this turmoil, things are about to become even more confusing. Her mother is about to arrive in Los Angeles with Delilah's half-sister and a secret that will change the way that Delilah looks at her past.

I've read both of Tish Cohen's previous books, Inside Out Girl and Town House, and enjoyed them both, so I was looking forward to reading The Truth About Delilah Blue. At the beginning, Delilah (or Lila as she's known in L.A.), has this tough exterior that made her an interesting character, but not one that I could particularly relate to. She has a dream, but she has an attitude- one that prevents anyone (including the reader) from getting too close to her. Given her background- being abandoned by her mother, moving to a new country at a young age- this was understandable, yet I still felt distanced from her. I was glad when she begins to lose some of her toughness and she lets those around her in a little more.

What really made this book an enjoyable one for me was the way that Tish Cohen takes a topic that, when we hear about it on the news, is so black and white, and colours it with shades of gray. We find out partway through the book that Lila was essentially kidnapped from her mother when she was 8, by her father. As a mother, as a parent, my first instinct was to blame the father. I immediately thought that he didn't have the right to take a little girl from her mother, and at such a formative age. Lila finds out that she was a milk-carton kid, and that her mother never stopped looking for her, and her whole perspective changes.

However, it's not that simple. Cohen isn't there to make Lila's father a villain, and instead presents his side of the story through a series of flashbacks. As the story continues, and we "get to know" Lila's mother, who is staying in present day L.A. with Lila and Lila's half-sister Kieran, and we start to understand how Lila's father could have justified what he did. Does it make it right? No, not necessarily. Would it have been better if Lila had continued to live with her mother? Maybe, maybe not.

Cohen paints this difficult situation with shades of gray, and The Truth About Delilah Blue really made me think. It was refreshing to read a book where you're not quite sure what the ending will be, or even what you want it to be, and I certainly appreciated the way that Cohen presented things.

The Truth About Delilah Blue was highly enjoyable. Not only does Cohen shed new light on a difficult situation, but she also brings to live some lively and, for the most part, lovable characters. You can browse inside this book here, or visit Tish Cohen's website here.

Rating: 4 stars out of 5
Recommended to: Anyone looking for women's fiction that will make you stop and think
Challenges: 2010 100+ Reading Challenge, The Canadian Book Challenge 4

I received a review copy of this book from HarperCollins Canada in exchange for my honest opinion.
Posted by The Book Chick at 2:28 PM