Buyer Beware: Why I Don't Recommend Buying a Sony Television 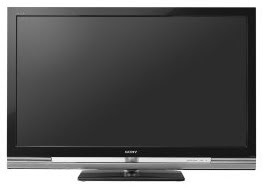 I know, I usually blog about books. What can I say? I love them. I devour them, chat about them, think about them, breathe them! However, my post today is, for once, not about books. It's about a television. In fact, it's about the one that's sitting in my living room right now. Why am I blogging about my television? Because I don't want you to make the same mistake that I did.

Last year (March 17, 2008 in fact- I still have my receipt) my husband and I purchased a television. We had had enough of our old tube tv, so we had saved our money and finally had enough to treat ourselves to a new one. This wasn't a decision that we took lightly, knowing that we wouldn't have the funds to replace our TV with a new one if it broke. We researched online, we spent (literally) hours in the Future Shop with a very helpful salesman (who knows us by name now, funnily enough), and finally we made our decision. We were looking for a TV that would bring us the ultimate in high definition for a reasonable price. We have three gaming systems (XBox 360, PS3, and Wii), two of which support HD gaming. We also later purchased a BluRay player (coincidentally a Sony). We get HDTV channels with our satellite package. We needed a TV that would support all of this. We were looking for good picture, decent sound, and, well, a quality product. This was supposed to last us a while, as I have no desire to replace my TV on a yearly basis.

We finally settled on purchasing the 46" Sony KDL-46W4100 model. Man, was that a mistake! The TV was okay for the first couple of months, great picture, decent sound (we have a surround sound system, so the less-than-amazing sound didn't really bother us). We enjoyed watching it, and we didn't have any problems with it at first. Then we had a few pixels burn out. We were told that this was normal, so we chose not to make a fuss. However, in April 2010, ONE MONTH after the warranty expired, horizontal lines began to appear across our screen. At first there was one across the top. Then two, then three. The things were multiplying! We called Sony, who were absolutely no help because our warranty had expired. Although it had expired less than a month before there was "nothing that they could do" to remedy this problem with their unsatisfactory product. What did they care, right? We had bought it, the money was in their pocket regardless of if it broke right away or not. You can understand our frustration when MORE lines began to appear on the screen, this time horizontal ones across the bottom. At first there was one line, and that one line quickly multiplied to five. Yes, we now have a total of eight lines across our TV screen. Sony will do nothing to assist us, and these lines are so distracting that I have a hard time enjoying the programs and movies that I watch. Now there are sections of the screen that will flicker when we are watching a show with a lot of white background and no, it's not the channel. We can't sell a TV with 8 lines across it, so we're stuck with this hunk of junk, and it's only a matter of time before the whole thing goes out on us. Unfortunately, we are not the only ones experiencing this problem. Please check out the comments section of this site. I am appalled that 5 other people (out of the 13 who commented)  have had very similar problems to ours. What's Sony doing to remedy this problem? Nothing. From them it's, "Sorry about your luck, folks".

The point to my lengthy tirade? Please, if you're in the market for a new TV, don't buy this subpar garbage. It will just end up in a landfill somewhere. Our TV was an absolute waste of money, and now we're back at square one, only we have to buy a new TV with money that we don't have to boot. I don't know if all Sony TV's are this horrible, but I certainly won't be spending my money to find out. Congratulations, Sony, you've lost a customer as I'm getting rid of my BluRay player and PS3 as well. I have no intention of spending my money on products made by a company that doesn't stand behind them.

Do yourself a favour, don't support a company that doesn't care about its customers or its products and skip buying Sony products altogether. And especially make sure that you steer clear of their TV's.
Posted by The Book Chick at 12:12 PM