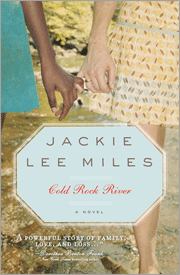 After a rough childhood filled with secrets and misunderstandings, Adie Jenkins finds herself pregnant with the baby of the only man who's ever paid any attention to her. Although Adie is only 17, she decides to marry Buck and he moves her away from her home in Cold Rock River to start fresh in Hog Gap. Once they arrive, things don't start improving. Buck's mother, Verna, hardened from years of disappointment, both resents her and tries to make her life more difficult. Buck is having problems keeping a job for any length of time, so they live with his mother and his "baby-brained" brother. When Buck finally manages to find a job, he works long hours with Imelda Jane, the store owner's shameless daughter, and Adie is sure that something is going on between the two of them.

Thankfully there is some good to go along with the bad. Murphy is a local chicken farmer who helps to set Adie up with a home for herself, Buck, and the upcoming arrival. He also helps her to start her own business in order to supplement the meagre income that Buck is bringing home. Murphy and Willa Mae, an elderly woman filled with spunk, become unexpected friends at a time when Adie needs  friends the most. Willa Mae carries around a journal of mysterious orgin and trusts Adie enough to let her read it. The journal is the story of a black slave, and the tragedy found in her story helps Adie to get through her own.

Cold Rock River tells the alternating stories of Adie and Tempe, two women who experience tragedy after tragedy as a result of their circumstances. I especially enjoyed the story of Tempe, a black slave girl who is moved from plantation to plantation. She has everything taken away from her, but somehow she finds the resolve to carry on. This part was especially well-written- the story was written authentically, with spelling and grammatical errors diliberately inserted to give Tempe a true voice. The horrors that many slaves had to endure at the hands of their masters were detailed, and gave me a new appreciation for what they had to go through just to get through the day.

The only problem that I had with this book was how much tragedy every character experienced. It seemed as if every person in the book had been through multiple devastating tragedies, and it made me wonder how much tragedy one person could go through in a lifetime, even if times were hard. Adie's family experienced tragedies, as did Buck's family; Adie and Buck go through several after their marriage, and Tempe the slave girl experienced several unthinkable ones. It seemed like they would just get through one tragedy and another one would rear its ugly head. I found myself having to suspend my disbelief that so much could happen to such a small group of people in order for me to enjoy the story.

Thankfully this didn't detract from the story for me overall. Jackie Lee Miles has a gift for getting inside a character's head, and this book was a tribute to triumph over adversity. All in all, it was a satisfying read. Thank-you to Sourcebooks for sending this review copy! Tomorrow Jackie Lee Miles will be guest blogging here, and I will be giving away two copies of the book, so make sure that you check back!

Rating: 4 stars out of 5
Recommended to: Fans of Southern fiction
Challenges: 2010 100+ Reading Challenge, New Author Challenge 2010
Posted by The Book Chick at 5:00 AM