Review: "All I Ever Wanted" by Kristan Higgins 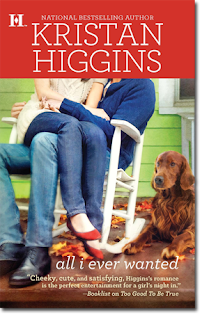 Callie Grey has been in love with her boss since, well, since well before he was her boss! Mark has to do nothing more than smile at her and her stomach automatically knots. He was her first kiss, in a closet of her youth, and he's continued to hold a special place in her heart despite the fact that she's well into adulthood. Then there's the matter of their five-week fling about a year ago. Callie found herself in Mark's bed, and hasn't been able to forget about it, despite the fact that Mark broke up with her because of "the timing".

Callie finds herself wanting to forget about Mark, fast, when Mark announces that he's dating the company's newest employee, who happens to be the spoiled daughter of the firm's largest client. Callie's friends urge her to find someone new, if for no other reason than making Mark realize what he's missing. She throws herself into online dating, but is taken aback when she finds herself falling for the town's newest, but rather aloof, vet.

Suddenly Callie finds herself thinking "Mark who?" but little does she know that the path with her new beau will be rough sailing ahead.

I have to admit that I shy away from reading romances. I'm a chick lit kind of girl, and there's so much of that out there that I haven't ventured into reading a lot of romance. That being said, I have to say that the cover and the description of Kristan Higgins' latest just called out to me. It called out so much that I read it shortly after receiving it, and I have to say that now I know why this one was calling my name. Higgins has written a book that is, yes, packaged as romance, but it kind of sits on the fence between romance and chick lit. It's not quite romance, not quite chick lit, but it is a delightful combination of the two.

I really, really enjoyed this book. Callie, our main character and all-around sweetheart, was someone that I loved from the beginning. She's the peacemaker that you can find in most families, the one slow to anger but quick to love, and you just can't help but root for her from the very beginning. She has this genuine desire for people to like her, but I never saw that as a bad thing (being a bit of a people pleaser myself). She lives with (and adores) her elderly grandfather who lost a leg after a stroke and an accident. She loves her father despite the fact that he cheated on her mother 22 years ago. She's a hard worker, a good sister, beloved by her nieces, yet she can't seem to get a break. Here she is, stuck working with and mooning after Mark, a man who so clearly does not deserve her. I was so glad when Ian, hunky vet with a reserved personality, broke onto the scene. Now there was someone that I could see Callie with! Handsome, mature, maybe a little wounded emotionally, but I could tell that there was a good person hiding under that gruff exterior.

Callie wasn't the only character that I loved. There was Ian, of course. Noah, the gruff grandpa with a heart of gold. Bowie, the beloved husky. Freddie, the slacker brother with a surprisingly good "listening ear". One of Higgins' strengths lies in creating quirky (imperfect) characters that you just can't help but love. While reading I wished that I could just drop in and have dinner with them all.

There were a couple of really funny scenes in here (the scene with the turkey had me laughing out loud), as well as some touching moments. All I Ever Wanted was the perfect balance of romance, humour, fun, and of course, happy endings, and it left me wanting more. Fans of both chick lit and romance should find this one to be a worthwhile summer read.

Rating: 4 stars out of 5
Recommended to: Fans of both romance and chick lit
Challenges: 2010 100+ Reading Challenge, New Author Challenge 2010

I received a review copy of this book from FSB Associates in exchange for my honest review.
Posted by The Book Chick at 8:03 AM