Review: "The One That I Want" by Allison Winn Scotch 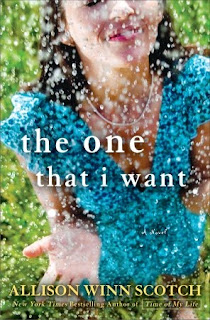 Tilly Farmer is 32 years old and has it all: she's married to her high school sweetheart, Tyler, she's working as a respected guidance counsellor at the high school that she graduated from, and they are finally trying for a baby. After a rough childhood- her mother passed away and her father battled the demon of alcoholism while Tilly raised her two younger sisters- Tilly feels that she's entitled to some happiness, and to some peace. Everything changes when Tilly wanders into the fortune-telling booth at their town's annual fair and is given the gift of clarity from an old friend, despite the fact that the details of her new gift aren't explained to her.

Suddenly Tilly is having visions of the future, and they aren't pleasant. She sees her father falling off the wagon and getting drunk, she sees her husband packing up a U-Haul despite the fact that she doesn't want to move, and when the visions begin to come true, she feels powerless to stop things.

As Tilly, once again, begins to pick up the pieces of her broken life, she curses the new found clarity that she has, but she also comes to the realization that her life was not as perfect as she once thought that it was. As Tilly tries to control her gift, and her future, she must figure out what it is that she really wants.

I started lusting after The One That I Want a couple of months ago when I stumbled upon Allison Winn Scotch's blog, so I was excited when I got the opportunity to review it. I haven't read either of her previous books, so I didn't know exactly what to expect, but I'm thrilled to report that I loved it!

The One That I Want is a highly enjoyable coming-of-age story. When Tilly was young she lost her mother and had to become a surrogate mother to her two younger sisters, given that her father was in no shape to raise three little girls. The fact that she had to mature so quickly has left Tilly in a suspended state of childhood, determined to cling to the things from her youth despite the fact that she is no longer in high school. She's even made her husband promise to not make her leave their little town, which eventually has made him resent all that he has given up for her. While those around her continue to change and grow, Tilly remains stuck, which is what this book is all about. When you're stuck, how do you become unstuck?

There's a lyrical quality to Winn Scotch's writing, making her book a pleasure to read. In the beginning she effortlessly transplants readers back to their high school days, to the days when possibilities were endless and the future was still unknown, with just a few carefully chosen words. I don't have particularly fond memories of high school, but she even had me longing for the old days!

Despite the fact that The One That I Want could be primarily classed as women's fiction, Winn Scotch manages to inject some mystery as well as a touch of the ethereal into her novel, and somehow it just seems to work. I loved this book, which manages to be both serious and fun at the same time, and highly recommend it! I expect that it will make its way into many beach bags this summer, because despite the often serious topics, it will make a fantastic beach read.

Even though Allison Winn Scotch has got to be busy this week, as The One That I Want was just released yesterday, she still took the time to answer a couple of questions for me:

The Book Chick: What is your favourite part of the book publishing process? Is it when you start writing a book, seeing the finished product, or something in between?

Allison Winn Scotch: I have a few favorite parts: the first is writing the very last word on the very last revision. Every time I start a new book, there is always a teeny, tiny sliver of doubt that I won’t be able to scale the mountain again, and when I prove that I can, it is unbelievably fulfilling and exhilarating. The second is hearing from readers for whom the book resonated. Ultimately, that’s why authors write, and there is nothing more gratifying.

TBC: The One That I Want is your third book. Do you have any advice for aspiring or debut authors?

AWS: Yes, read a lot of other authors who write similarly to you. Read with an ear for how they’re writing and how they’re building their books. Also, be open to constructive criticism and take your ego out of the equation. There is no learning ceiling for the learning curve in this job, and too many aspiring writing think that they’re already brilliant when, in fact, they’re not. (Present company included, so I’m allowed to say those sorts of things.)

AWS: I have a huge TBR pile, but at this exact moment, I’m reading Leah Stewart’s Husband and Wife, which I’m really enjoying, and just started Holly LeCraw’s The Swimming Pool (because I left Husband and Wife at a hotel and have to buy a new copy, and needed something else to read until I got to the store!).

You can find out more about the author, Allison Winn Scotch, here, read an excerpt of The One That I Want here, or buy the book here. Make sure that you check out the details of her latest contest: buy her book between June 1st and June 4th, e-mail her the receipt or a copy of your receipt, and you'll be entered to win one of five fantastic prizes! She's also giving away a signed bookplate to the first 150 people who enter, so get your entry in today!

Thank-you to Crystal at BookSparks PR for this review copy!

Rating: 5 stars out of 5
Recommended to: Fans of women's fiction, anyone looking for the perfect beach read
Challenges: 2010 100+ Reading Challenge, New Author Challenge 2010, 2010 Chick Lit Challenge
Posted by The Book Chick at 5:00 AM