Review: "The Help" by Kathryn Stockett 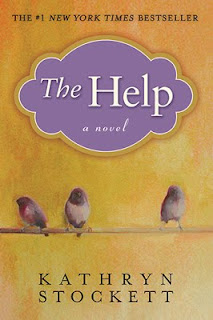 I'm pretty sure that I'm the last book blogger on the planet to review this book, but after a lengthy library wait (darn all those people ahead of me in line!), I finally had a chance to read it. For the second time this month I read a book that I was a little afraid to read because I was afraid that it wouldn't live up to the hype, and for the second time this month I was not disappointed. Thank-you to all of you bloggers out there who brought this one to my attention with your reviews- you were spot on!

The Help is the story of three very different women living in Jackson, Mississippi in the 1960's. Skeeter is a 22-year-old living with her parents on their cotton farm. Since she's from an affluent family, she belongs to the various elite societies and clubs in Jackson, but she yearns for more. She longs to become a writer, a real writer, and she isn't happy just settling into high society and marriage without another thought. Aibileen is the black maid to the Elizabeth Leefolt, one of Skeeter's best friends. She's still mourning the tragic and sudden loss of her son three years prior, and it breaks her heart that her employer Elizabeth dislikes her own daughter, Mae Mobley. Minny was the maid to elderly Miss Walter, but when Miss Walter's daughter, Hilly, puts her into a home, Minny is out of a job. With a drunk and abusive husband and five children at home she needs to find a new position, fast, but Hilly has spread false rumours around town that Minny is a thief, so Minny must take a risky job working for Jackson's social outcast, Miss Celia.

After a series of events that emphasizes how badly the black maids in Jackson are often treated, these three women come together to write a book that could change the lives of the maids forever. They must overcome adversity and put themselves at great risk to do so, but all three feel that it is a risk that must be taken.

The Help was eye-opening from the beginning. Written by Kathryn Stockett, a woman who actually grew up with a black maid in her home in Jackson, it offers a new perspective on how black people were often treated in the South in the 1960's. They often came in and raised the children, did the majority of the work and cooking, and were still treated like vermin, asked to use seperate toilets and dishes and tables so that their "diseases" were not caught. Stockett makes sure that she shows both sides of the story, though, and also tells stories of the maids who were treated like family along with those that were not.

The three fictional women portrayed in this book are often gentle, yet courageous, and use the power of their words rather than violence to effect social change. Written about a time when living in America could be hostile and even dangerous for black people, these women represent an important shift in perspective. A beautifully written book, this is one that everyone should take the time to both read and reflect on.

Rating: 5 stars out of 5
Recommended to: Anyone who enjoys well-written and thoughtful fiction
Challenges: 2010 100+ Reading Challenge, New Author Challenge 2010, 2010 Support Your Local Library Challenge
Posted by The Book Chick at 8:06 AM