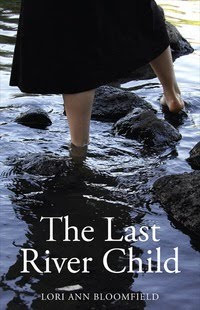 Yesterday I had the pleasure of reviewing Lori Ann Bloomfield's debut novel, The Last River Child (if you missed my review, you can read it here), and today she was kind enough to stop by and answer a few of my questions! Welcome, Lori!

The Book Chick: Your book centers around the myth of the river child- is this myth factual or fictional?
Lori Ann Bloomfield: I completely made up the river child myth. The seed for the idea came years ago, not long after I started writing the novel and was researching superstitions. I read this deliciously gruesome story about some poor person who had their tongue cut out. I don’t remember the reason for this punishment, but the severed tongue was tossed in a river and forever after that the river could speak. That story sparked my imagination and from it I created the Magurvey River and the river child myth.

TBC: What kind of research is involved when you write a historical novel?
LAB: That depends on the type of novel and the individual novelist, I suspect. I wanted to do just enough research to make the book come alive and be believable for the reader. The trouble is in deciding what is “just enough”? What I discovered was research can be a great excuse not to write. I also learned that history books are filled with information, but not necessarily of the type a novelist is searching for. I personally found photographs and first person memoirs from the early 20th century (the time period I was writing about) to be the most useful.

TBC: Did you know how the book would end right away, or did it come to you as your novel progressed?
LAB: I had no idea how the book was going to end until I wrote the ending. Writing for me is almost always a journey of discovery, meaning I usually begin with only a few images in mind, or the sound of a character speaking. Eventually these things become so compelling I start writing to find out the story. In the case of The Last River Child two images were with me from the very start: one was of a plane flying towards the horizon over water, and the second was of a house burning in winter and the snow melting around it. Not much to go on!

TBC: What was it in particular that inspired you to write The Last River Child? Was it a flash of inspiration, or was it an idea that came to you over time?
LAB: The Last River Child came to me slowly. And it was written very slowly over about seven years. It’s interesting though how the unconscious mind works. When I was in public school there were two students, one a girl, one a boy, both older than me, who were ostracized. They weren’t bullied in the sense that they were beaten up, they were instead almost completely ignored by everyone. This type of bullying doesn’t seem to get as much attention as more violent forms, but it is very primal and very cruel. The boy eventually committed suicide and I’m not sure what happened to the girl. But it wasn’t until I finished The Last River Child and was getting it ready for publication that I saw the connection and realized that for years I have carried those two children in my memory and imagination.

TBC: What are you reading right now? What books/authors/genres do you enjoy reading in your downtime? Are there any books that you've read in the last year that stand out for you?
LAB: At the moment I am reading “The Guernsey Literary and Potato Peel Pie Society” by Mary Ann Shaffer and Annie Barrows and I love it! It is an epistolary novel, which is wonderful. There is something so irresistible about reading someone else`s mail. Mostly I read literary novels, but I also enjoy biography and poetry. As for books recently read that stand out for me, last summer I read a novel called, “I Capture the Castle” by Dodie Smith that I was charmed by. I can’t imagine my life without books!


I’ve had a great time answering these questions. Thanks for inviting me to The Book Chick!

And thank-you for visiting! I love being able to gain a new perspective about a book I've read by being able to chat virtually with the author. Be sure to check out Lori Ann Bloomfield's blog if you get a chance- it's full of interesting information for aspiring fiction writers!
Posted by The Book Chick at 8:17 AM