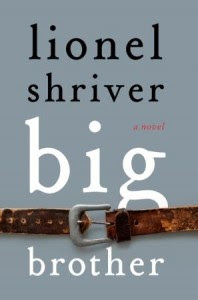 Pandora Halfdanarson is satisfied with her quiet life. Preferring a certain kind of man, she married later in life and gained not only a husband but a stepson and stepdaughter. Almost as a fluke she began her own company, Baby Monotonous, which has become wildly successful and now she has enough money to be comfortable. When Pandora receives a desperate call from a friend of her older brother asking her to take her brother in for a while she doesn't hesitate to send a plane ticket his way. Edison has always been someone that she looked up to growing up, a successful jazz pianist in his own right. However when she arrives at the airport to pick him up she is stunned by what her brother looks like. Since she last saw him he has ballooned into a morbidly obese man who must weigh well over 300 pounds.

At first she chooses to overlook Edison's obvious weight problem but when it comes time for him to return to New York Pandora decides that she can't ignore the elephant in the room any longer. She decides to move out with Edison and supervise his weight loss for a full year, despite the fact that she may lose her husband and marriage as a result.

What follows is a chronicle of the ups and downs of a year dedicated to extreme weight loss and dealing with the issues that led to the weight gain in the first place.

I found this story fascinating! Who among us hasn't wanted to lose a few pounds and as a result became almost obsessed with the scale and every morsel that goes into our mouths? Taking it one step further, who hasn't seen a morbidly obese person and felt disgust or wondered how they could have let themselves become that way? An obsession with weight has dominated our culture and I found Big Brother to be very timely. I'm always reading news articles online concerned with how large we have become as a society, or about companies refusing to make their clothing for larger people.

Shriver didn't glamorize extreme weight loss. She chronicled many of the good days as well as the bad days, balancing the picture that she presented. I especially appreciated the very last chapter. Since discussing it would give away the interesting twist I won't, but I did find it quite surprising and it almost felt like a signature Shriver twist.

Thought-provoking and insightful, touching on subjects such as obesity, marriage and the relationship between siblings, I wouldn't hesitate to recommend Big Brother to anyone looking for a novel that won't be quickly forgotten. My thanks to TLC Book Tours for inviting me on this tour.