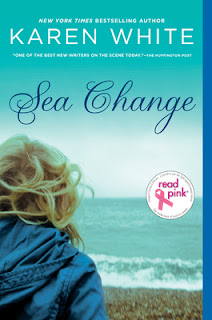 Ava Whalen was almost as surprised as everyone else was when she met Matthew, fell in love with him and married him within such a short period of time. Now that they have tied the knot Ava and her husband are going to occupy his home on St. Simon's Island, despite Ava's intense aversion to water. Ava figures that she can overcome something so seemingly insignificant with her new husband by her side.

However life on the island is not as idyllic as Ava initially believed it to be. Shortly after her move the fact that Matthew had a wife before her who died under mysterious circumstances comes to light. Suddenly Ava isn't so sure that she knows her new husband as well as she once thought. Add to that the fact that Ava is frequently overcome with unexpected visions from the past as well as the fact that her mother seems to be hiding something significant from her and Ava's previously unshakable foundation falls out from beneath her.

I have only read a few of Karen White's books but I can say that Sea Change is my favourite so far! Although I generally read women's fiction set only in the present I occasionally surprise myself by how much I enjoy a book with firm roots in history. The fact that Sea Change takes place in both the present and in the past made it additionally enjoyable for me and I loved the fact that there was a mystery that needed to be solved as well. I enjoyed finding out what was going on bit by tantalizing bit!

That being said I do wish that the switch between the past and the present could have been defined a little better. At times the switch was abrupt and I found myself confused as to whether we were in the past or the present. Additionally there were a few details that I found too coincidental to be believable.

I thoroughly enjoyed the story of Ava and Matthew and their ancestors and I can highly recommend Sea Change to anyone looking to be transported to a different time and place, if only until the last page. My thanks to the publisher for providing me with a review copy of this book.