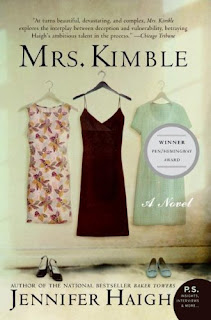 I picked this one up a long time ago- probably more than a year ago- at our local Coles store when they were having a 4/$10 sale. I was intrigued by the premise- three very different women all marry the same man (at three different times). This story is essentially their story- the story of how one man can be perceived in so many different ways.

Mrs. Kimble opens with the story of Birdie, Ken Kimble's first wife. He's just left her, alone with two children and no income, to chase greener pastures (read: younger women). She had an idea that he was cheating, but refused to admit the facts even to herself. It's at this point that we meet Charlie, his son, whose point of view is the only male perspective in the book. From here we meet Joan, a wealthy woman in her own right, a breast cancer survivor, and a woman who has never been married but deep down has wanted to be all along. Ken arrived in Joan's town with his young girlfriend in tow, but quickly realized that it would never work with the young girlfriend. Finally we meet Dinah, who coincidentally was the baby-sitter for Ken's children with Birdie way back in the day. Despite their age difference the two marry, and create a life with one another. Dinah is the one who attempts to reconcile Ken with his older children, but when a scandal breaks, the truth about Ken becomes glaringly apparent.

Mrs. Kimble was interestingly enough not focused on Ken, even though he was the thread that held all of the stories together, but is focused on each individual woman- their downfalls and their self-esteem issues. Ken is so thoroughly unlikable, smooth like snake oil salesman, but not much substance, that the reader wonders what these three women saw in them. In fact, Ken seems to prey on women's insecurities about themselves, and makes them feel good about themselves by doting on them. It was an interesting character study, about women, our individual hang-ups, and the lengths that we'll go to just to "belong" to someone.

The well-developed characters were what made this book so compelling, although the plot was interesting as well. I especially like that the ending is left open to interpretation; each individual reader could create their own happy (or not so happy) endings. This is yet another book that I have read recently that I can highly recommend.